Teacher's Pets:
Pets in the Classroom
By Christie Craig

If Mr. Pig, the three-week-old pot belly swine, has to be bottle fed every thirty minutes, how many times will Mr. Pig eat in seven hours?

For some children this may be just a word problem. However, for the children at the Houston based, Redd school it's so much more. Because these students may be one of the lucky fourteen who'll feed the orphaned pig his bottle today. 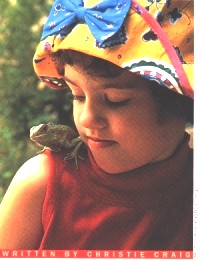 "I couldn't believe it," says one parent. "I'd gone to drop off my son's lunch and there Mrs. LeBlanc was teaching math, chalk in one hand, a baby pig cradled in the other. She even used the pig in her lessons. And as crazy as it sounds, I think that pig played a part in my son's ability to do math."

Although Mr. Pig may be one of the more unusual animals to occupy the classrooms at the Redd School, in all reality, he's only one of many. Because on any given day you'll find bunnies hopping around the children's feet as they do their class work. You might find a cat nestled on a child's lap as he reads aloud, a cockatoo intently watching a child write his letters, a hedgehog participating in science class, an iguana perched on the window sill, head tilted in alertness, setting a good example in listening.

Denna Baskin, the Redd School's owner and director, is a firm believer that animals, in all varieties, are good for a child's education. "I grew up on a ranch," says Baskin as she strokes Cookie, her pet cockatoo, behind her wing. "I'm sure even back in 1978 when I started incorporating the pets into the school there were studies to back up my beliefs, but I didn't know about the studies. As an animal lover, I had personally experienced the benefits."

In addition to the forty or more classroom pets, the three-and-half acre campus at the Redd School is occupied by horses, pigs, goats, chickens, and geese. "All of them are an important part of the school's staff," states Baskin. "Kids love animals and when you can take something that inspires a child and use it as a teaching tool you have a real advantage." 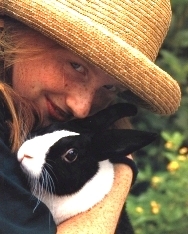 Baskin adds, "Animals are great teachers in themselves. They teach us patience, respect for life, and responsibility. Any educator can tell you that teaching moral issues makes algebra look like a walk in the park."

There is also a lot of responsibility that comes along with having animals. Liability insurance is high and there's the issue of hygiene. Baskin states, "Animals are unpredictable and rules have to be enforced. However, in the last nineteen years we've had no serious incidents but we've definitely seen the benefits."

Because of those benefits many schools are incorporating classroom pets into their kindergarten and first grade programs. What makes the Redd School stand out, besides the types of pets, is that their classes, preschool through eighth grade, are all involved with the animals. "Animals aren't age prejudice," says Baskin. "I've seen many unhappy teenagers find comfort in a little pet time."

The relationship between children and animals can be so therapeutic that programs exist nationwide specifically to bring troubled children together with animals. These programs are known to work on issues, common in adolescence, such as low self-esteem and behavioral problems. 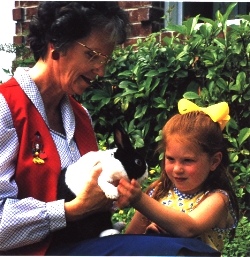 "As we've seen at the Redd School, those benefits aren't limited to just the emotionally and physically handicapped," states Mary Wakefield, Ed. D., staff Psychologist. "Most children at one time or another will suffer from a negative self-image and some sort of behavioral problem."

What does that have to do with a child's education? "Everything," answers Mrs. Charlotte Money, who's been teaching Kindergarten for twenty years. "A positive self-image and a well-adjusted attitude is crucial in learning. Although it's hard to admit being outdone by Matilda, the class hedgehog, or Oreo, the rabbit, oftentimes my class pets get better results at dealing with one of these problems than I."

Mrs. Money recalls one instance when a student was experiencing a difficult home life. "I kept seeing the problems at home affect his behavior at school. In lieu of punishment, he was given more responsibility with the animals. Five minutes spent feeding the fish or bottle feeding a baby lamb and he was calmer and able to return to his class work." 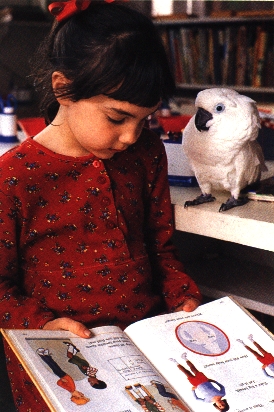 Mrs. Higham spends her days with sixteen first graders and Sam, a floppy-eared rabbit. "He's just one of the class," says Mrs. Higham. "He follows most of the rules and he's potty trained. There is one rule that unfortunately," she smiles and whispers, "I mean fortunately, Sam doesn't obey. And that's time-out.

"Sam just doesn't understand that time-out means time alone. It sounds ridiculous, but I believe Sam knows when a child is troubled. I'll put a student in a corner and Sam will hop over for a visit. In few minutes I'll see the child gently petting Sam and shortly after that we have a more manageable attitude. I give most of the credit to time-with-Sam, not time-out.

"Basically, I believe having an animal in the classroom is equivalent to receiving a hug. They (animals and hugs) are good for our souls."

Common sense tells us what's good for our souls has to be good for our minds. Science, however, has long since proven that petting and stroking an animal can significantly lower one's blood pressure. One study done by Brooklyn College Researcher Dr. Erika Friedmann showed that simply having a dog in the room has a calming effect on children. "Where petting is concerned, however, there's an added benefit for a child. Children crave the tactile and sensory stimulation," states Dr. Wakefield. Stroking something soft, like fur, feeds an emotional need.

This doesn't explain the children's strong bond to the hedgehog, but some things, animal/human affection, are meant to be enjoyed not explained. 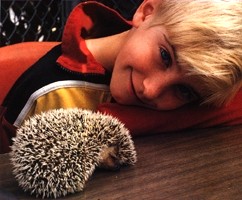 Another positive effect brought on by having pets in the classroom is in the student/teacher relationship. Students have a tendency to view educators as hard, unapproachable disciplinarians. Yet when a child sees a teacher offering affection to a class pet they begin to see this person in a less intimidating light.

All the teachers at the Redd School agree that the animals help them do their jobs. "Animals provoke a student's curiosity and challenge their imaginations," states Ellen LeBlanc, teacher and surrogate mother to Mr. Pig. "So if a student tells me `the goat ate my homework,' I have to give him the benefit of the doubt. All joking aside, we find ways to channel the animal-inspired enthusiasm and creativity into their science, math, and English."

The school taps into that enthusiasm and uses it in different subjects in various ways. Studying animals is a science in itself. At the Redd School most the students have experienced the miracle of birth. Even the kindergartners can tell you why some eggs contain baby birds and some don't.

In math class, besides using Mr. Pig, the teachers encourage students to figure fractions by giving them the responsibility of mixing formula and feed for the animals. And a high percentage of their English papers are written about class pets.

When you combine the imagination, and knack for adventure that animals and children have in abundance, the opportunities for growth and insight are amazing. "Animals can guide children willingly and enthusiastically to new heights of maturity and wisdom," states LeBlanc. "And if these same animals ever learn to teach math and English, the teachers, better be on the lookout for a new career."